Jeff had been killing yarn uncrocheting happily in the living room prior to dinner.

When it was time to eat, he strolled into the kitchen sporting a fashion forward look. Jeff being a trendsetter, Staff predicts that such dressing for dinner will soon be widely in vogue. 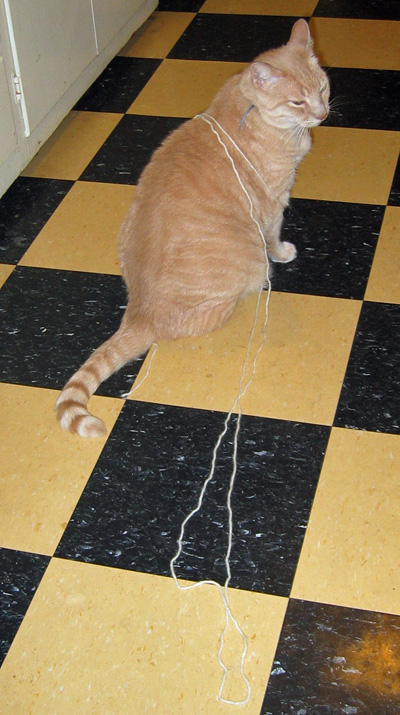 This morning Jeff was swiping at some yarn and accidentally snagged his claw in a Staff finger. After recovering from the ensuing swelling and blood loss, Staff determined that Jeff must have a claw trim.

Naturally Staff avoids any activity that Jeff might dislike. However, while Jeff dislikes claw trimming in fact it is the lesser of two evils; if Jeff inadvertently kills Staff, there would be no one to prepare Jeff’s dinner.

Jeff was most cross, and a wrestling match began.

Staff was eventually able to snip the sharp points off most of Jeff’s doom talons. A pile of treats was offered in hopes of earning forgiveness. 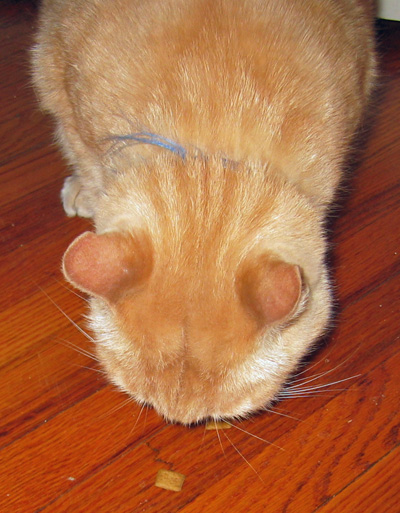 Jeff found a stray Q-tip that had wandered under the bathroom vanity. After considering it briefly, he decided to kill it. 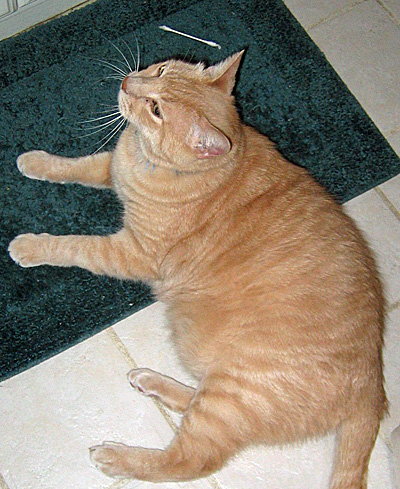 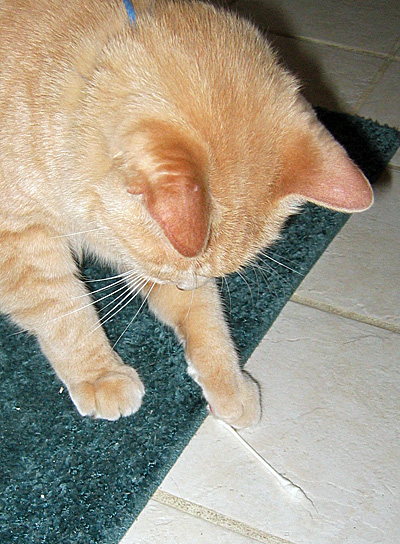 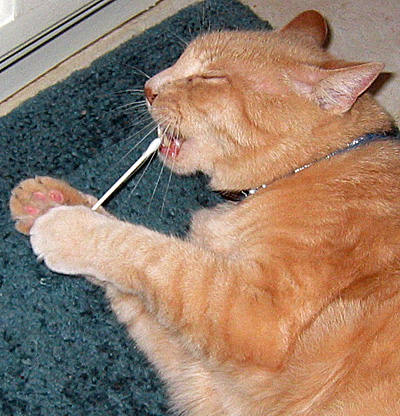 Staff disposed of the body before Jeff could eat it, as cotton swabs can carry parasites.

The dog has a blanket on the couch; it’s her customary place.

Since the weather has cooled off, Jeff has an increased fondness for blankets. This morning he decided he liked the couch blanket. 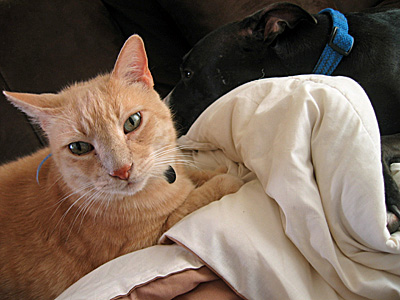 The dog had been on it at the time. 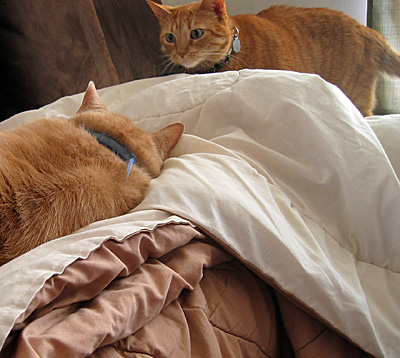 After the dog had been banished, the blanket scene heated up further when Rita arrived to investigate availability.

EDIT: Staff will respond to several questions submitted by commenters:

“Do you have a couch for your Mom?”
– Jeff generously permits Staff to use any furniture he is not currently using.

“It’s time for Staff to go blanket shopping.”
– Staff stocks many blankets and distributes them widely. Staff has concluded that there will never, ever be enough blankets.

“Where is Norman, and does the dog have a name?”
– Generally Norman is hiding in the closet or burrowed under a blanket. He appears each evening promptly at dinnertime to ensure that Staff is on schedule.
– Staff calls the dog Hazel. Staff is not aware of Jeff acknowledging the other creatures by name.

“Is Rita Jeff’s sister or girlfriend?”
– Neither. Their relationship is best categorized as frenemies.

For those following the Southern California fire news, all is well at the House of Jefe. The Marek Fire is pretty close to our area, but the Santa Ana winds have pushed it in the opposite direction and so far its movement has been away from us. Staff monitored the situation all day, and fortunately thus far there has been no cause for alarm in our location. 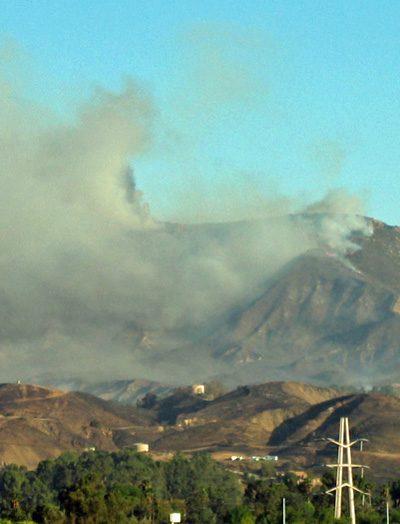 Jeff was given periodic status updates and took the information under advisement.

Jeff loves to sleep on the clothes hamper. It has many features attractive to the feline resident: elevated vantage point, window view, fleecy blanket.

This morning Jeff dozed on the hamper, feet elegantly crossed in a pose worthy of a glossy magazine.

Jeff’s feets; let me show you them. 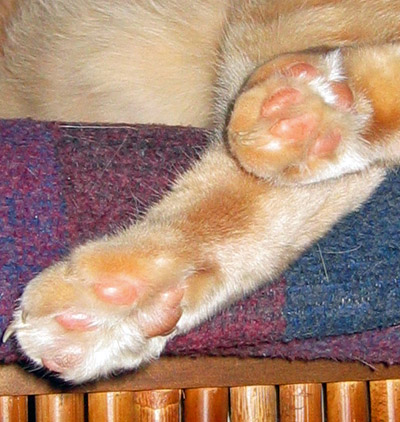 Staff provided Jeff with a small ball of purple yarn. 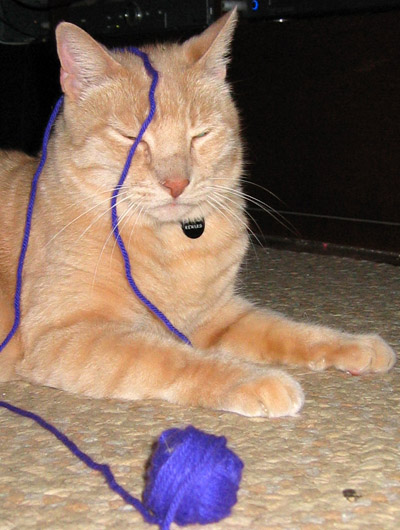 Initially Jeff sat still, communing with the yarn in a seemingly Zen-like state.

Then the trouble started. 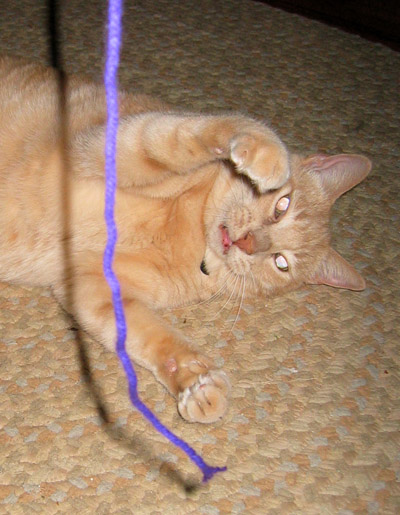 END_OF_DOCUMENT_TOKEN_TO_BE_REPLACED

Saturday brought the first rain Southern California has had in quite awhile. This did not deter Jeff from demanding to go outside. When he came back in a short while later, towel-drying was necessary and wet footprints were left all over the kitchen. 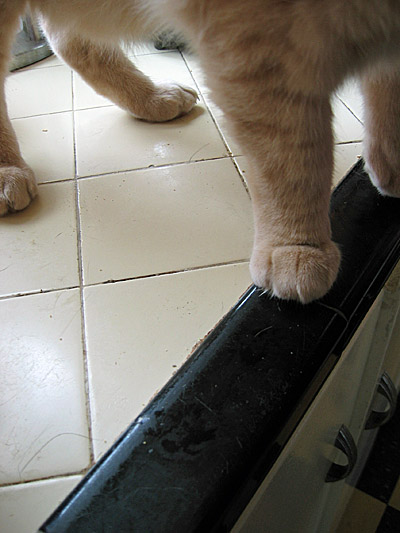 Jeff purred enthusiastically during towel-drying, as if it were some kind of spa treatment.

After dinner Jeff and Norman converged on the rug.

This appears to be an everyday type of occurrence, but actually it was startling. Norman is a scaredy cat, as it were, and so spends most of his time hiding: 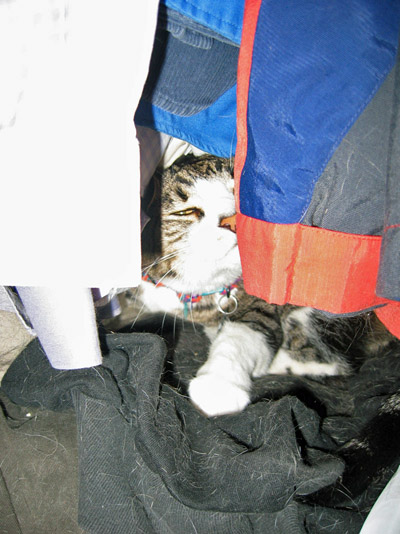 So, Staff was quite surprised to see Norman and Jeff just hanging out. 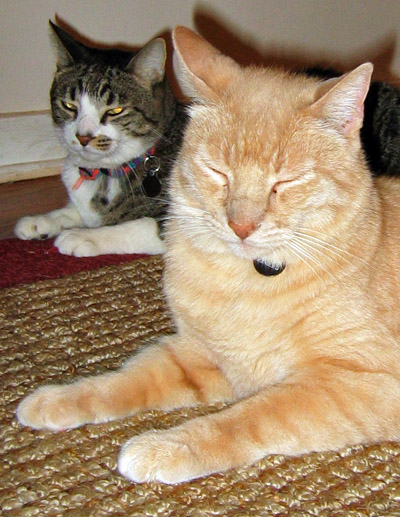 Perhaps this is a testament to Jeff’s irresistibility. Staff hopes Jeff isn’t recruiting the other cats for some kind of clandestine operation.

Staff had a bit of practice yarn crocheted into the shell stitch. Jeff seemed interested in learning crochet himself. Staff thought this might be possible, as he has needle hooks built in. 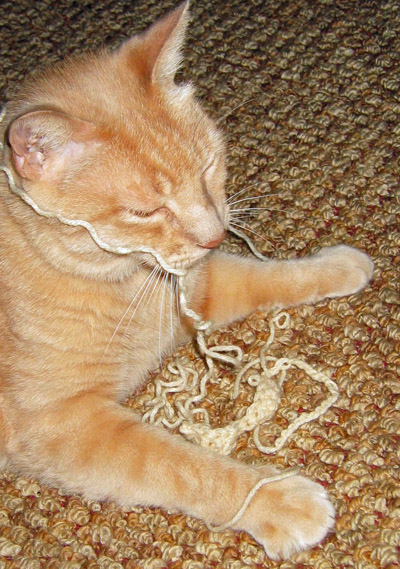 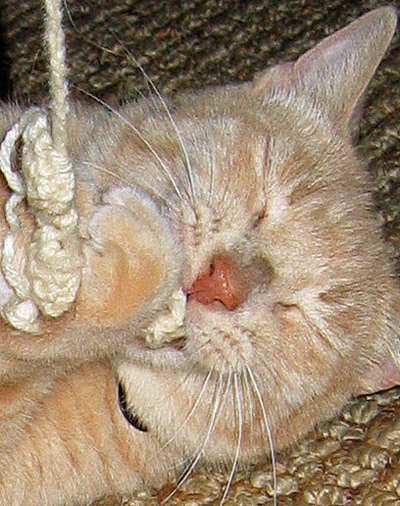 However, Jeff quickly ripped out most of the stitches and declined to create any.