For Christmas Staff received a package from Omaha Steaks. Staff thought the best part of the package was the dry ice. 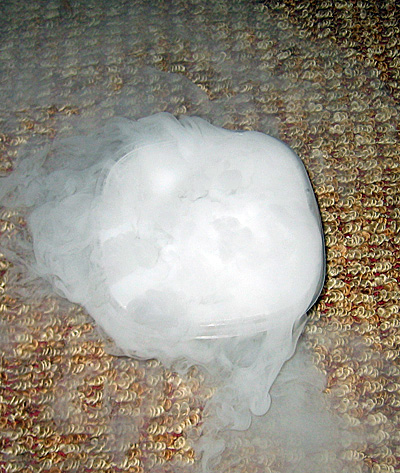 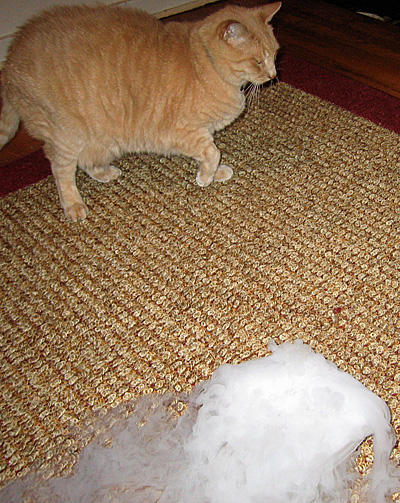 The Staff’s quality of service has slipped recently. I am very annoyed at being kept indoors while they claim silly excuses like “raining,” “nighttime,” and “40 degrees.” 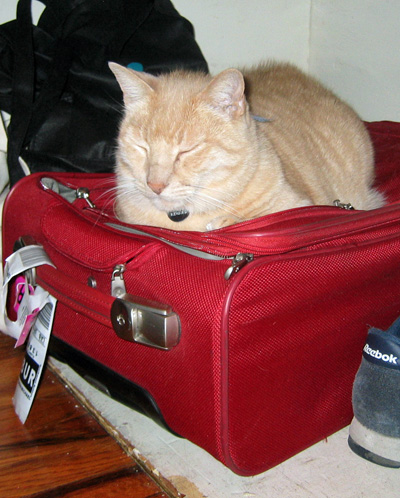 When I am through sleeping on this, I might consider packing my things.

Jeff sacked out on the bed this afternoon, trying to soak up the last bits of sunshine. 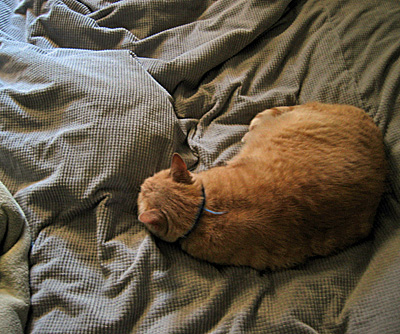 Norman, however, has another method of staying toasty; burrowing under the covers. Jeff slept right next to Norman Lump, seemingly unaware of Norman’s presence. 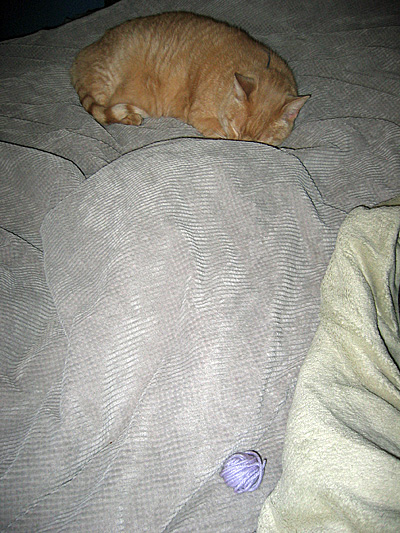 Perhaps in the future it will be cold enough to drive Jeff under the covers, but thus far Norman has it all to himself. 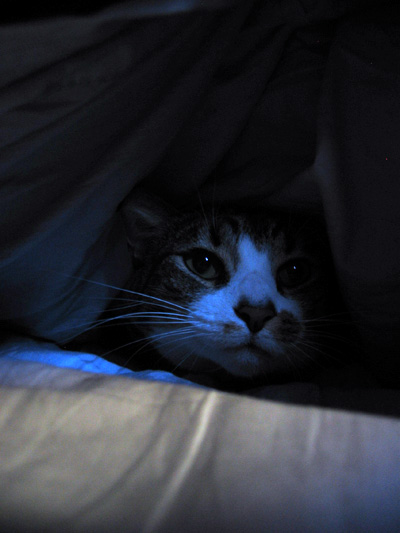 To prepare for winter weather, some put chains on their tires or add extra weight to the trunk. Get out the long underwear, perhaps, or bring firewood inside.

Here in the Casa de Jefe, we enblanket Jeff. 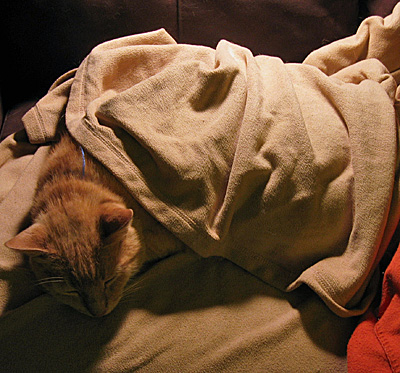 The colder it gets, the more Jeff needs to lie on Staff in order to absorb our warmth. However, Staff are inferior creatures that sometimes have to get up to go to the bathroom, and so there must be fallback measures. 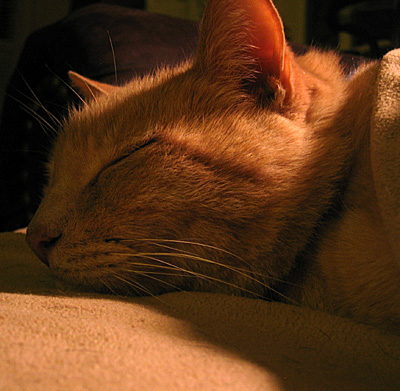 In some cases the fallback plan turns out to be superior to the original.

El Jefe went for his dental cleaning as scheduled. All went well; no extractions were needed. The vet staff commented on Jeff’s excellence throughout his visit, natch.

Jeff was extremely relieved to be retrieved by Staff, and to exit the carrier at home. He then performed a slightly woozy inspection of the house and Staff as follows:

1) Walk through living room to bedroom and back, meowing randomly
2) Stop intermittently to urgently lick IV bandage
3) Jump onto couch and solicit petting
4) Jump down and resuming walking/meowing path
5) Repeat

Apparently the bandage was a source of extreme annoyance, so Staff cut it off. 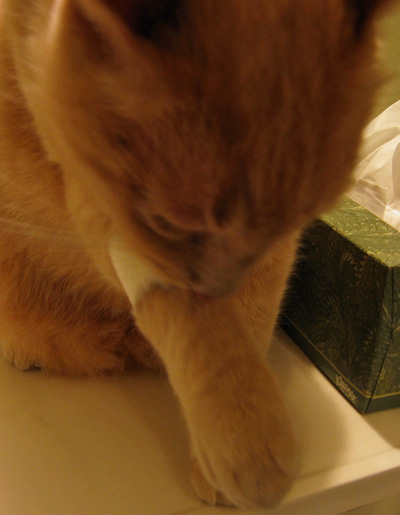 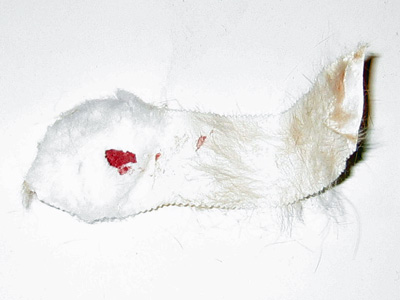 With the bandage off, Jeff settled down on the couch. 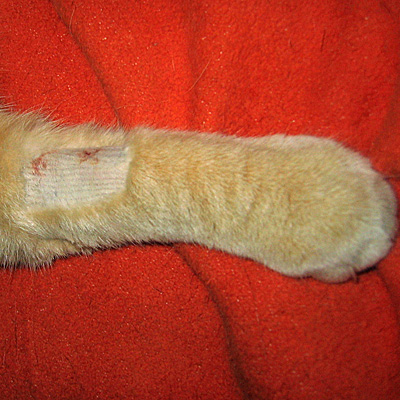 His eyes were a bit gummy, his manner a bit loopy, but his teeth have never been cleaner. 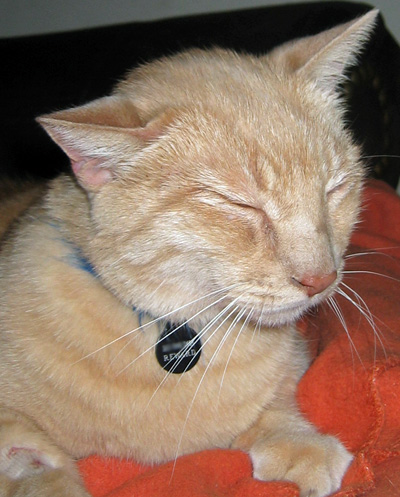 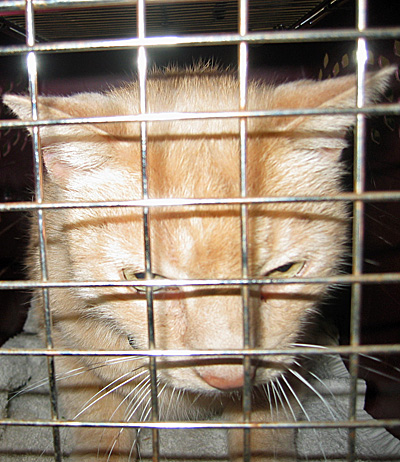 The entire furry family was carted to the vet on Saturday. They were poked, palpated, injected, and their blood was stolen. Jeff maintained his composure, but he clearly is not a fan of travel in the cat carrier. 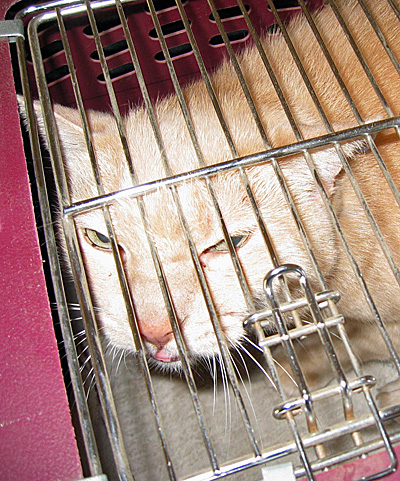 Everyone got an A on their blood tests. The bad news was that Jeff has gingivitis; apparently during Jeff’s previous life in the wild, he was not diligent with his dental care. Therefore Jeff will return to the vet Wednesday for a professional teeth cleaning.