Staff had corn on the cob for dinner. 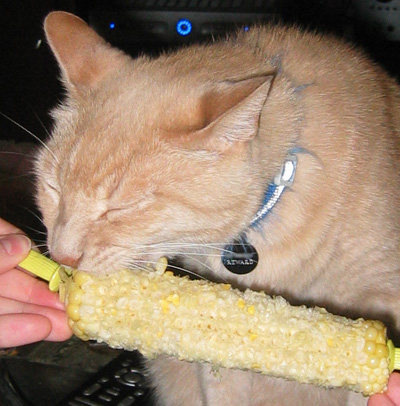 Jeff swatted, poked, and batted until he was granted access to a corncob. He then tried to fit the whole thing in his mouth, nearly succeeding. 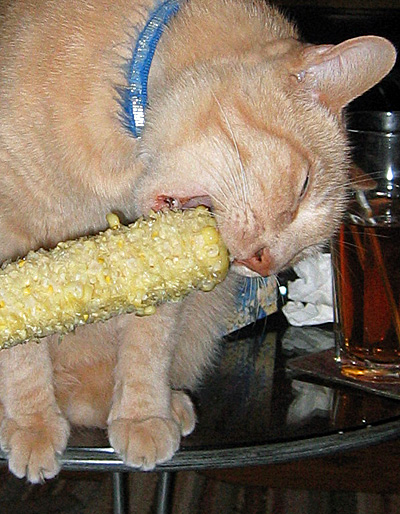 Staff cut off some kernels for him, all of which Jeff ate readily. 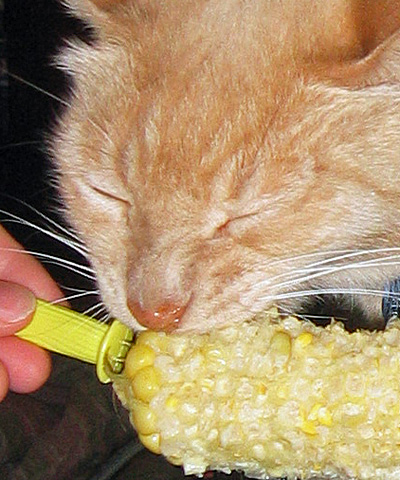 Staff now realizes that Jeff had been guarding the garden corn for purely selfish reasons.

The first ear of corn is nearly ready to be picked. Jeff seems to know this somehow, and guards it. 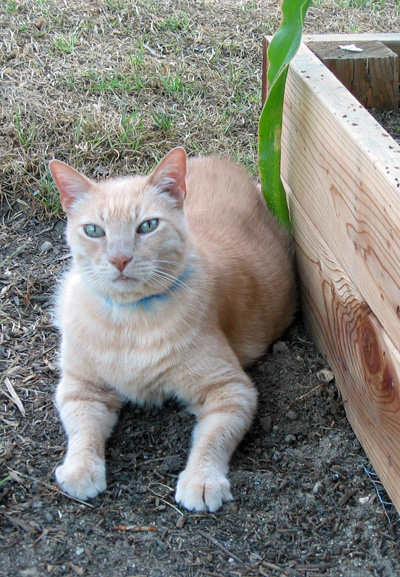 The summer roast is upon us. The heat limits kitty outdoor time to the morning and evening. 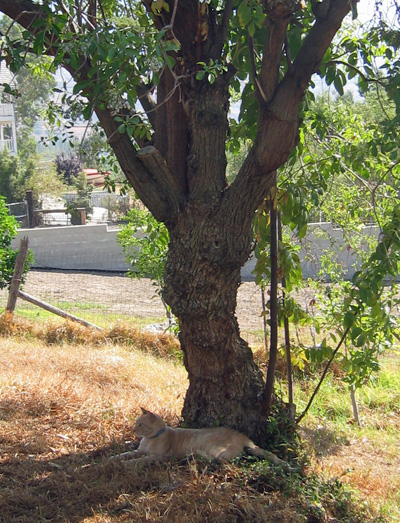 This morning Jeff lounged in the shade. 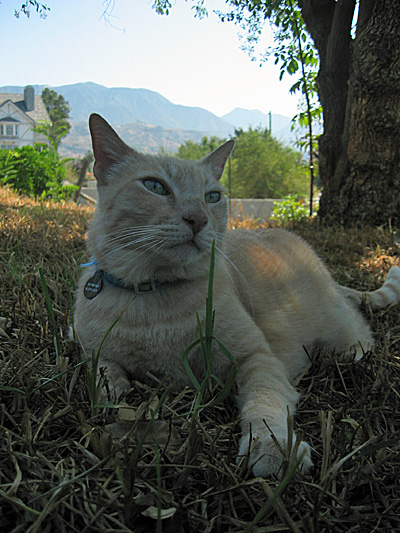 Even when relaxing, El Jefe is always watching. 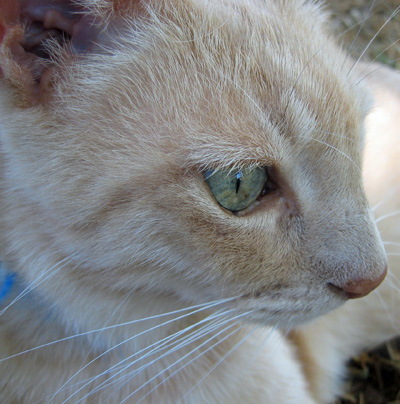 The doom can erupt at any moment. 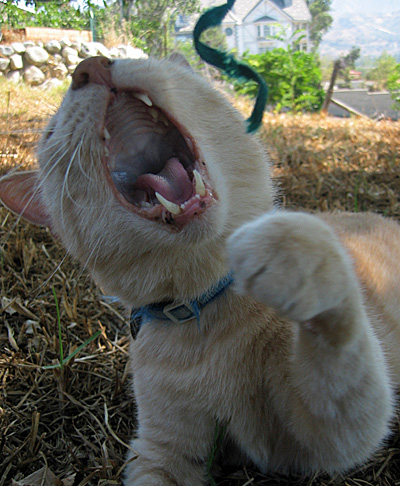 Jeff finally returned to the dry food bowl this morning. Staff is greatly relieved, as Staff had begun to fear Jeff was becoming addicted to baby food.

Staff described this to the vet, who said Jeff must finish the hated pink antibiotic, but is surely better.

Additionally, today Jeff meowed incessantly to go outside and swiped a paw at Staff’s dinner – so, he’s pretty much back to normal. 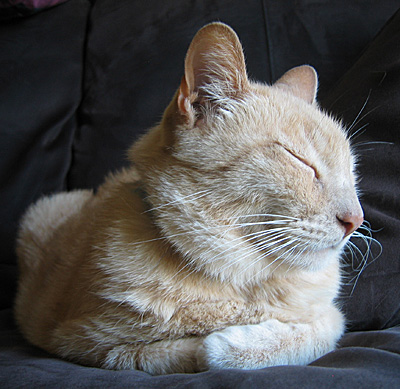 Jeff, there is another brush fire in our hills. 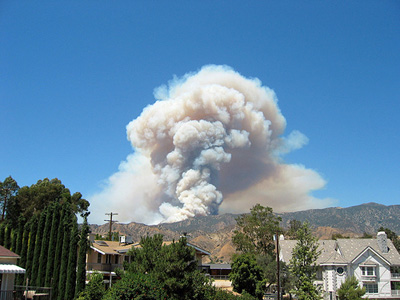 There are airplanes and helicopters zooming over the house. 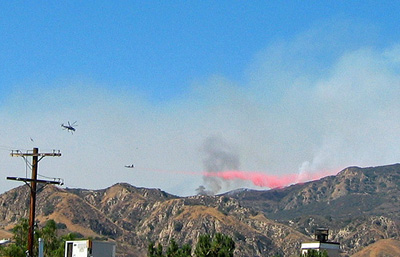 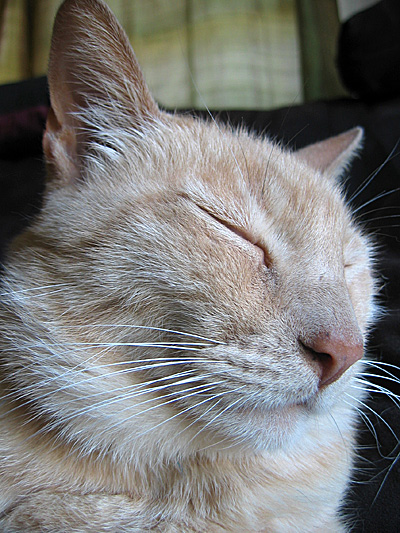 Last night Jeff felt better enough to bat at the string for a bit, though halfheartedly. 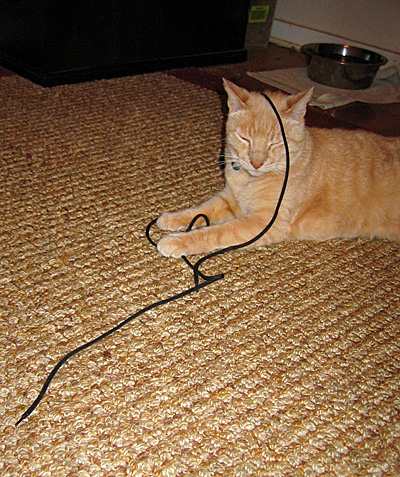 This morning he ate a robust amount of baby food for breakfast. 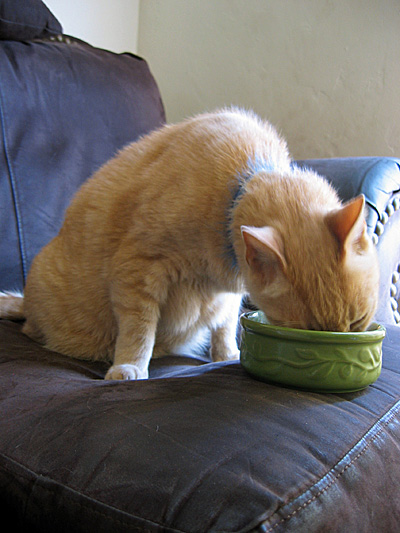 Staff can tell Jeff isn’t feeling 100%, because Staff had bagels with cream cheese for breakfast consumed in Jeff’s immediate vicinity, and Staff actually got to eat most of it.

This morning the vet reported that Jeff’s blood work came back normal. He advised to continue the oral antibiotic and baby food, and call him with a status update Friday.

Staff is greatly relieved that Jeff apparently has no growths, tumors, masses, metabolic disorders, blood chemistry irregularities, or other serious physical malady. However, the tests did not check for demon possession or curses, so we have not ruled out everything.

Jeff did not eat his dinner last night and seemed to feel a bit under the weather. After he refused turkey lunch meat today, Staff took him to the vet.

Kind and skilled as the vet is, Jeff does not like him. 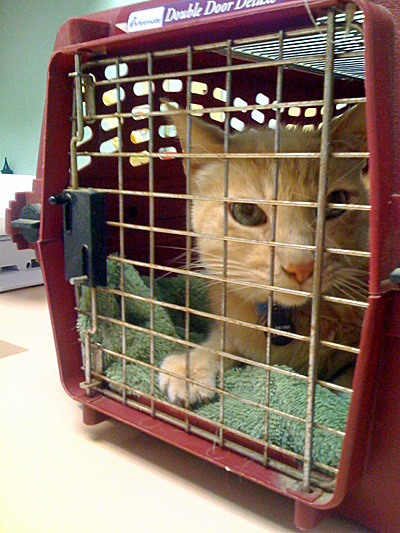 Jeff had no fever and no obvious issues per the physical exam. Though the most likely cause is an infection of some kind, on the vet’s advice Jeff got x-rays and blood work.

Nothing out of order was visible in the x-rays, but they were quite interesting. The vet explained what was what: heart, liver, kidneys…. and in the horizontal view, “and that’s, well, fat.” 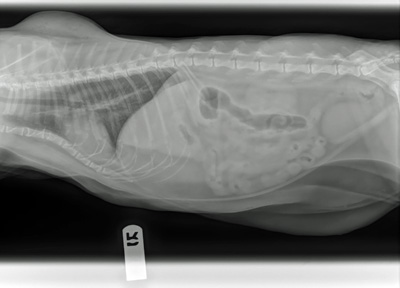 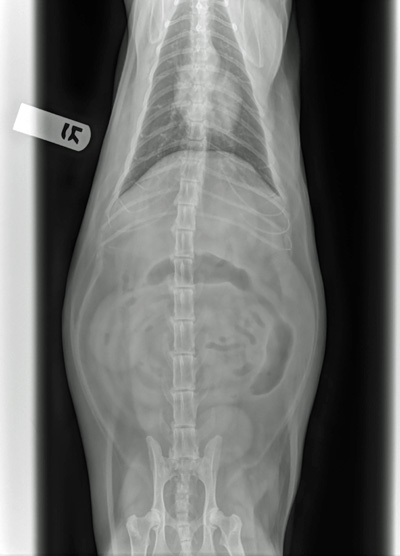 Jeff received some fluids to prevent dehydration and a dose of Pepcid to help his tummy. After returning from the ominous Back Room, Jeff was happy to return directly into the carrier in hopes that it would soon transport him back home. 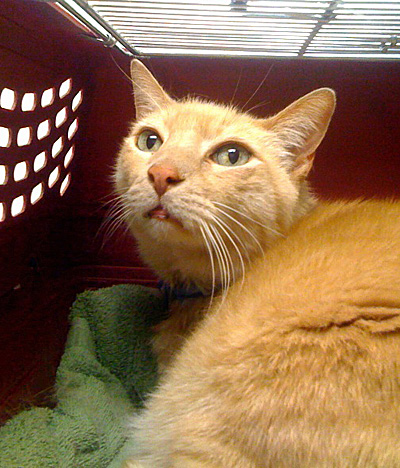 The blood work results will be ready tomorrow. In the meantime Jeff was assigned a shocking pink liquid antibiotic, which he did not enjoy, and a diet of baby food. Jeff took only a few licks of the chicken baby food; Staff cannot fault his lack of enthusiasm, as chicken baby food is quite unappetizing.

Jeff did seem to feel somewhat better this evening and is “resting comfortably.”